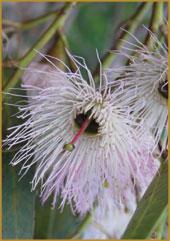 The origins of Swan Hill Seedbank can be traced back to the 1994-5 Murray Corridors of Green project. This project was managed by a partnership of NSW and Victorian Landcare Groups, the Field Naturalists group, relevant government departments, Greening Australia and community members – operating as Mid Murray Greening Consortium.

During the ‘Corridors’ project it was clearly identified that to undertake the revegetation proposals, there was a desperate need for the collection, storage and distribution of native seed in the areas being rehabilitated.

Over the next two years, 1996-7, members from MMGC established the Seedbank committee. Critical support was provided by Greening Australia Vic central Victorian representative David Millsom who motivated the committee and generated donations. The major contributions were $2631 from the statewide CWA movement, and $600 from the Landcare Foundation. A 6 metre by 3 metre site office was obtained and installed at Swan Hill’s centre for people with disabilities. Natural Heritage Trust funding was obtained and administered through Greening Australia NSW, and this provided the funds to employ the first paid co-ordinator.

The Seedbank began to supply seed for projects developed by Greening Australia, Rural Land Protection Board, Department of Natural Resources and Environment, Catchment Management Authorities, Landcare Groups, Indigenous Groups and individual landholders. The first major seed orders on a contract basis were generated by North Central CMA for its revegetation work on the Northern plains.

The Swan Hill Rural City Council supported the Seedbank by providing a new site in Swan Hill, which is still the existing site. Council provides the site at a very low annual lease, and also sponsorship of electricity and water use, and support and assistance from the Environment Officer.

The important site development of 2006 has been the purchase and installation of a site office, using the Bundaberg Rum sponsorship, and the 2007 Bundaberg funding providing the cooling / heating units for the site office and the cool room containers.

The Seedbank project has successfully achieved, and is continuing to achieve what the Federal Government had been looking for from its Natural Heritage Trust investments – addressing the long term environmental needs that are outlined in Federal / State / Regional strategies for both biodiversity decline and salinity issues.

There is more to a Seedbank than managing the collection, storage and distribution of native seed. It also involves the development of new practices, educating the community of the benefits of revegetation, the importance of biodiversity, delivering training and awareness programs to the whole community.